I'd definitely play this system.  It's a well laid out retro clone, with more complexity than the early ones, maybe not quite as much customization as ACKS, but the setting is fascinating.  This adventuring in Howard's world of imagination.  Conan, Kull, Thulsa Doom these are the type of people who flourish in this setting.  It will function quite well as a demi-plane that can be visited from any campaign.  Who knows some of the party might even be able to return from it. 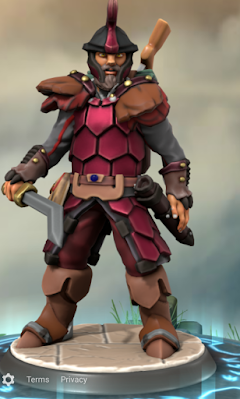 Beroqwe is the son of an exiled Kimmerian tribesman who made his living in Khromrium as a fletcher after his exile.  His large size impressed Klarikhea, an itinerant Ixian necromancer who hired him as a cheap bodyguard.  Beroqwe seems to have an aptitude for some magic, so she has taken him on as an apprentice too.    Although, at this point, she isn't completely sure if it's the Scare spell or his imposing physique (6'11", 250 pounds) that is getting the reaction.

ASSH gives you four different methods for rolling attributes, I used 2d6+6 as it's my personal favorite.  I had wanted to build a straight necromancer, but it wasn't in the dice.  So I read through the variant classes and found the Warlock.  Decent fighter, some magic use, perfect for the stats.  Everything else was looking through the book for the right page.  I took advantage of the pre-made equipment packages to speed up the process.  That is the one place I'd give ACKS a clear advantage, as they have multiple templates per class, each with their own equipment package.  A little more variation in other words - without spending too much time customizing the character.