Today we get to the first game on my shelves that I have never played.  In fact this is the first character I've ever rolled up for Gamma World.  Mainly because I just picked up the reprint back in 2019 and earlier because we really didn't play any post-apocalyptic RPGs in college.  Oh I had Metamorphosis Alpha and Cucch had Morrow Project (tomorrow's post) but other than a single Morrow Project one shot we were AD&D, C&S and Traveller. 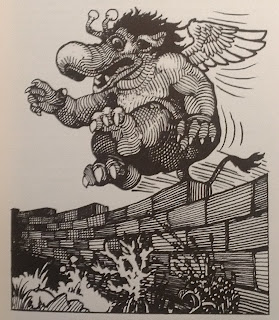 So without further ado

Other than his CON, I'd rate him as below average a marginal character, despite rolling 4d6 and dropping the lowest when rolling.  He rolled very well on is Hit Points.  One die per point of CON.

As a humanoid he has d4 Physical and Mental mutations.  I rolled one of each.

Physical I rolled double ought and get to chose.

And I rolled two 2's when determining the number of Defect Mutations, so he has one. I randomly determined it would be a physical mutation and rolled Double Physical Pain.

There's no roll for cash, just whatever the DM allows you to start with.  They recommend only primitive tools and armor.

Mutations: Heat Generation:  Projects beams of heat from his eyes.  4d6 damage once every three turns.
Mental Control: Allows the mutant to take control of another being's body and operate it as their own.
Double Physical Pain: Mutant takes double damage
Spear 1d6/1d8 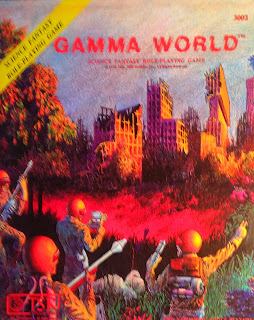 Furs and Skins AC 8
Gerigel-Gande looks human and resents his tribe's attitude towards him due to his Heat Generation ability
that he revealed as a child.  Small, weak, slow and easily hurt he kept his Mental Control ability secret when he developed it, but used it to put a number of his tribesmen into embarrassing or dangerous situations to avenge real and imagined slights.  Because of his low pain threshold and generally low stats he is cowardly and prefers to use his Heat Generation or at least keep opponents at spear's length.
Posted by Rod Thompson at 4:23 PM