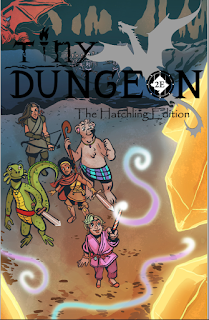 And finally, I get to the end of the challenge and will be creating a character for an introductory RPG.  Tiny Dungeons is a very simple system, the Hatchling Edition is pitched at introducing kids to role playing games.  I can say that my oldest granddaughter enjoys it, the younger one is still at the stage of trying to eat the dice rather than roll them.

Character creation is quite simple, no die rolling involved.

1. Select a heritage.  Usually know as race.  Choices are Human, Fey (Elf), Dwarf, Goblin, Hatchling (Dragon), Salimar (Salamander folk, pyro or cryo), Treefolk (Ents), Karhu (Bears) or Lizardfolk.  Each heritage determines your hit point and has a trait associated with it - except humans who get to pick an extra Trait.

3. Select a weapon group proficiency.  Weapons are grouped by Light melee, Heavy melee and Ranged.  You select a group and then select one weapon type from within that group as a weapon you have Mastered.

4.  Select a Family Trade (background).  Any trade you want, this is to jump start backdtory creation.

5.  Select a Belief.  This is a guiding principle that helps the player define what's important to the character and then determine how the character will act.  The authors seem to have an appreciation that players often think 'Chaotic Me' is an acceptable alignment.

I'm going to jump back two days and stat up my Suarian Hch'ait Lord as a Lizardfolk. 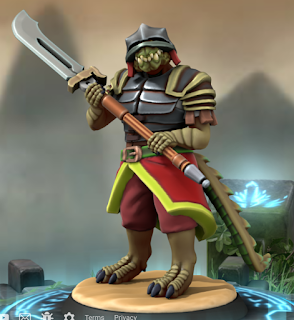 Traits:  Cleave - gain an extra attack when I drop an adversary to 0 HP

Strong - Gain Advantage when doing a Test involving brute force, like kicking a door in.

The system is really stripped down.  Everything becomes a Test.

All weapons do 1 point of Damage

Armor is what ever you want it wear - it doesn't count unless the DM makes it count.

These mechanics make it trivial to run an adventure from another system while converting everything on the fly.