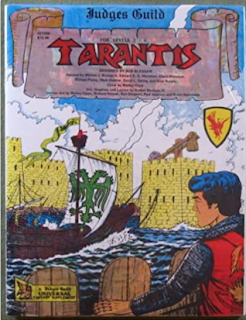 Not actually a game system, rather a universal way of stating up your character to use across systems.  Judges Guild in it's heyday was putting out material for D&D, AD&D, Dragonquest, Traveller, Runequest, Chivalry & Sorcery, Tunnels & Trolls, Superhero and Empire of the Petal Throne.      URA was the one notation to bind them, so you could for example convert your character (or possibly  the intention was for you to take their adventure) and convert it from say D&D to Runequest.

Anyway, I've found the system written up at the back of the Tarantis and Wraith Overlord books.  The core mechanic of the system is that every characteristic is a three digit code, making spacing easy in a fixed space font on a manual typewriter.  Note that there are some differences between Wraith Overlord, published 1981 and Tarantis, published 1983.  In particular, the third digit in Wraith Overlord was used to determine "the number of times per day the characteristic can be tested to the utmost without checking for stress damage."  How to set it and what checking for stress damage entailed were not detailed.  SO, I'm going for the simpler system and setting the first digit of those scores to 0. 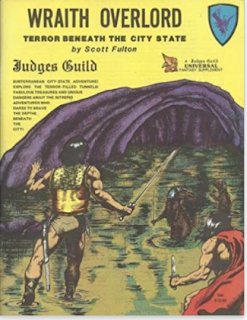 CLS - Class.  Profession or Occupation.  The list of abbreviations in Tarantis lists 27 different classes,   from Alchemist to Witch, including Child, Demon and Valkrie.  Not really sure why you would play a child, but handy for an NPC I guess.

ALN - Alignment is an indication of moral tendencies.  Positive Law/Good, Negative Chaos/Evil.  First two digits are significant, the third digit indicates a "suppressed tendency."  Whatever that was supposed to be.

LVL - Level in the class.  First two digits are the level; third digit indicates the total number of occupations in which the character is skilled.  Doesn't make a lot of sense when I read the last bit, every occupation should have it's own Class/Level combination; so is it if you're an armor you are skilled in making, say 11 of the 32 different armors?  You're hitting old Traveller hexadecimal notation now to keep it to a single digit.

HTK - Hit to Kill.  i.e. Hit Points.  Took me a while to puzzle that out first time I encountered it.  In URA, characters don't die until the damage equals negative Constitution.  That's a convention worth stealing.

ARM - Armor Type worn.  But not really.  In URA armor acts to reduce damage.  ARM is the sum of the armor points of all the armor you are wearing.  It will absorb up to one tenth the ARM in a single round, the rest presumably bleeding through as damage to the character.  Wearing armor reduces the Agility and "SPD", an otherwise undefined term, but I'll presume speed of a character.  Each piece of armor has it's own three character code indicating the type of armor, gauntlet or tower shield, etc and the material that piece is made from.  Probably going to give that a pass this time.

PSL - Personal Social Level.  C&S and Runequest have this as core mechanics, but in this case I'll use the system from City State of the Invincible Overlord.  First two characters are the social level, third is "notoriety gained in a twenty mile radius."  Hmm, using CSIO it will be Hierarchy (1st) Social Level (2nd & 3rd positions).

CON - Constitution.  Ability to withstand and recover from physical hardships

END - Endurance.  Amount of physical hardship a character can be subjected to.  Almost but not quite the same as Constitution.

LED - Leadership.  The ability to command respect and boost morale.

LCK - Luck.  The first two are the character's luck, the last one is the number of times a character can test their luck before incurring the wrath of the gods.  No instructions on setting it.

WPN - The character's commonly carried weapon.  The table runs form Sword to Trebuchet and includes codes for all of Gary's favorite polearms.  First position is material, last two are the weapon codes.

Let's get rolling.  I'm going to use 3d6 to generate the stats, assuming that this is basically an AD&D character from the City State.  Rolled the physical stats first, ended up with a high dex, so going for a straight Thief.  Level 1, has master one occupation so LVL = 011.  Gets his dex bonus to ACL so leather with 17 dex is 5.  ARM, I'm calling leather as a "Hooded Tunic" (9 pts), material is Leather (2 pts) 982 = ARM of 18.  As a thief he's automatically in the guild, so Hierarchy 4 Social level 3 (Apprentice).  Weapon is an Iron (I) Shortsword (SS)

Of Altanian descent, he has sable hair, the typical reddish brown skin and gray eyes.  An apprentice thief looking for loot and adventure (but especially loot) in the City State of the Invincible Overlord.

I just noticed I skipped a couple of systems, like this one and AD&D.  I'm going back and picking them up.