The one I played the most, four years in college, a little in the Navy and back to it again the last couple of years.  In my mind it's the classic edition, and so needs no real introduction, I can jump straight into building the character.

Not overwhelming and I know of some players now a days who would consider this one "hopeless".  Still

looks like a decent magic user, so I'll kit them out that way.

One of my home rule randomizations is character sex, I use a 70/30 male/female split when I don't have a specific character concept in mind. 08 will be a guy.

I did a lot with the Wilderlands setting the last couple of years, including creating my own distribution of human cultural/racial types, including distribution of skin, hair and eye coloring within each population based on the tables in the various Judges Guild Installments.

Background 64 = Altanian descended from the tribesmen south of the City State.  Most have reddish brown skin, black hair and green or brown eyes.  I use Old High German name for these characters.

I'll roll up his height and weight using tables I derived from Chivalry & Sorcery.  And use that system for his social class - those being weaknesses in AD&D in my opinion.

Height and Weight first get d20 rolls to determine "frame" 14 height and 17 weight, he's average height with a heavy frame.  Another d20 to determine actual values 1 gives me 5'8" and reading up a row for the frame 155 pounds.

Social - a roll of 46 makes him a Townsman, and an other roll of 42 tells me he's the fifth child.  No real chance for inheritance, but yet another role to determine what his family thinks of him is 01 so he's considered a "Good son".  Finally rolling on the profession tables first 70 then 33 tells me that his father works for a Cobbler, but doesn't own the shop .  At least this guy has good shoes. 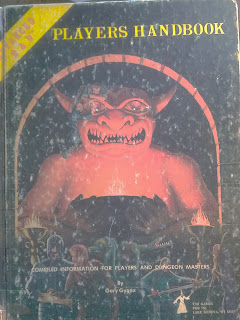 The son of a cobbler, Bernger has the red skin and black hair of his Altanian ancestors, it's his dead white eyes that manifest his talent with magic.  He's 5'8, weighs 155 pounds and has been accepted as an apprentice by Trapper Kistotian on By Water Road, where his appearance seems to motivate the charmed dwarves laboring in the sweatshop.