The first RPG I ever played at a new wargaming club at the University of Minnesota in 1977.  I don't remember where we saw the announcement - probably a story in the Duluth News-Tribune, but my friend Brian Sorvik were experimenting with creating our own abstract wargame at the time.  He had his licence, so he picked me up out in Clover Valley and we drove in to meet these like minded people.  In addition to learning to play Go, and being introduced to a large number of Avalon Hill hex and counter board games, I was invited to go on a little excursion to Jakalla. 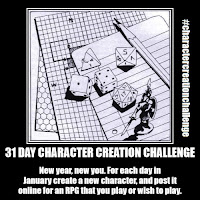 I'm generating this character with the 2017 PDF reissue of the rules, it contains both Gygax's 1975 forward and Arneson's 1987 forward to that revision.  If you are not familiar with Tekumel and works of Professor M.A.R. Barker visit the Tekumel Foundation. He was a visionary who built as original and compelling a world as Greg Stafford's Glorantha or Dave Hargraves' Arduin.  One of my few regrets is that I went to college at the University of Minnesota when he was teaching and was completely unaware of the connection between him and the game.  Of course, I took Norwegian and Russian while he was a Middle Eastern language professor, so never had a class from him either.

Starting on Page 12, the rules jump into Basic Talents, better known in the hobby as Prime Requisites. EPT uses percentile dice for a linear progression, rather than the 3d6 bell curve.

Intelligence and Constitution are only average providing no bonuses or penalties

Psychic Ability is a measure of the character's ability to use magic devices and cast spells.  He is somewhat Psychic, having a +5% chance of spells working and can cast all levels of spells

His high Dexterity makes him Agile and he receives +2 to hit and +1 on damage.

After generating the Basic Talents, a roll is made to determine 'Original Skills' representing skills learned during childhood.  These set the character's background.  With a roll of 77, Kisin can pick one Plebian, one 'Skilled' and one Noble skill.  He chooses Merchant, Scribe-Accountant and Interpreter, providing him a background as a member of one of the merchant clans which crisscross the Five Empires in their chlen-cart and slave caravans of goods.  He's learned to bargain, keep the books and has picked up Mu'ugalavyani in travelling to trade with the Red Hats.

Professional Skills are next and as a Priest he rolls a 31 allowing him to chose three out of the first four skills listed (2 modern languages, 2 ancient languages, Produce Light and Detect Evil/Good).  As he expects to help his clan with his professional abilities he chooses 2 modern languages: Salarvyani and Yan Koryani, Produce Light and Detect Evil/Good.  After all one does not negotiate with the dead.  The last two are spells and as a Level 1 priest he has a 60% that the spells do NOT work, modified by his Intelligence and Psychic Ability.

His clan must have experienced a set back recently, as he only has 27 Kitars (gold pieces) to his name right now.  Fortunately, the temple provides him with room and board for now.  He purchases a lead weighted mace (as a Priest he cannot use edged weapons outside of sacrifices) [7K]and a shield [10K].

Name:   Kisin hiCoyopa of the Clan of the Golden Sheaf

He can cast Produce Light (30' radius/10 Turns) and Detect Evil/Good (2 Turns) once each every day.  He has a 55% chance of NOT casting the spell correctly.

He is armed with a Mace that he hits AC 9 (No armor) on a roll of 8 due to his Strength and Dexterity and does 1d6+1 damage.  The bonus point coming from his Dexterity

He is a priest of Ketengku the Many Eyed, Knower of All and Cohort of Thumis.  His holy symbol is a a stylized eye.