After seventeen posts spanning games published over thirty four years, I finally reach the OSR with James Raggi's opus.  And I can look back on those game systems and see a trend, the first decade or so of gaming the systems varied in complexity, but offered little in the way of character customization by the players.  What starting equipment you had was determined by your starting gold roll.  Mages usually rolled randomly for their initial spells and skills, except in Runequest, either didn't exist or were predetermined.   Traveller, let you select a limited number of skills for lists of six - but you could die in character generation so it was still very quick to roll up a new character.  In the mid 80's starting with Warhmmer (in my collection at least), players had to invest more time in character as you started to see complex decision trees that needed to be considered when you made your starting selections.  Still once you made your decision, what ended up with still depended on a die roll rather than you choice.  Space 1889 was similar, unless you were an Inventor when all of a sudden you had a LOT of choices to make.

With Shadowrun, character generation took a new turn into techno-fantasy and all of a sudden the player had detailed control of the character creation process.   New class, skill selections, body modifications all could be tailored at the start of the game.   With 3rd Edition and the d20 Open Game License this trend went to the heart of the hobby and you could spend a couple of hours - even with the buggy Character Creation software - in character generation.  The Dark Eye has a separate pedigree, but it still took me 3-4 hours to create and write up yesterday's character.  If the character generation system had been as choppy as AD&D's spread between the Player's Handbook and DMG; I'd still be figuring out what Talents to take and how many points in each.  I usually call these systems 'Crunchy'.

Today I created an OSR character in 11 minutes, including basic equipment purchase.  Roll 'em up and let's play! 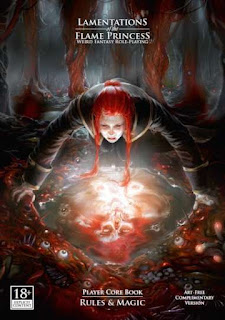 Actually had to roll stats twice, as the first one had an adjustment score of -2!

I also realized I never got the magic book, so I took the spell from Adventurer Conqueror King's Elven Spell-sword default entry.

LotFP is a system I have never played, and don't really intend to.  There are others I like better.   But I love the adventures that have been published for it.  They hit the weird fantasy mark right on the nose as the full title of the game says.   I ran 'Forgive Us' using ACKS rules in 2019 and it was easy to convert, a unique story line with weird grisly consequences for failure.  I had as much fun as the players did, almost fell out of my chair when they asked what was in the warehouse they had searched and we rolled on the Trade Goods table: Livestock - Elephant.