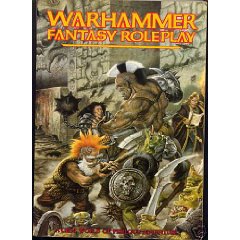 Warhammer is probably better known in the US as a science fiction and tabletop army game than as a RPG, even though it has gone through a number of editions and spawned the Zweihander retro-clone.  I have only used in as solo-play and not much of that honestly.  I still like to use it's settlement patterns in world building and really I sit down and read through all the different occupations over and over again.  That's where it's so different from D&D and most other games - your character might be adventuring, but they have occupations with specific skill sets they can learn and then use on their adventures.  Almost all starting professions have at least one skill that should  be immediately useful, although if you're a Fisherman - maybe not.  Rather than leveling you spend experience points on acquiring Skills and improving your Characteristics.

Let's jump into rolling up a character, lots of dice rolling to do.

Weapon Skill (WS) - Melee skill, some weapons require a Specialist Skill to use them

Toughness (T) - damage resistance, in terms of saving throws not subtraction of damage to the body

Wounds (W) - Hit Points.  Most humans start with 6, if you're lucky your careers will give the opportunity to add a few more.

Initiative (I) - described as 'speed of thought', it's reaction time

Dexterity (Dex) - A measure of a character's manual dexterity

Leadership (Ld) - Ability to lead others

Cool (Cl) - the character's ability to remain calm under pressure

Will Power (WP) - Mental and magical resistance and awareness

Fellowship (Fel) - A measure of the character's social skills

The character profile is expressed as a two row stat block

I have a choice of Human, Elf, Dwarf and Halfling.  Dwarves are pretty standard portrayal of the race.  Elves are a bit more androgynous and divorced from humanity than we usually see, but not nearly as far off as Runequest takes them.   Halflings - this is the only system where the halfling race is provided a backstory that makes sense as to why they aren't miserable slaves and food to dragons.  But, yeah, they'd fit in in Bag End, Hobbiton, The Shire.

I'm going to choose human, because there are so many more occupations they can start with.  I need a d3 (which I've had ever since I was a kid) and two d10s.  Note each race has it's own variation on what they roll for characteristics, Dwarves & Halflings for example roll D2+2 for Movement.

Attacks 1 = 1 (no randomization to begin with)

Next is Racial Abilities

Now I'm going to choose an initial class, which will determine initial skills and occupation.  The four classes are:

Academic - minimum 30 Intelligence and Will Power.

She qualifies for all of them, so I'm choosing Academic.

Initial Skills:  Each character stars with D4 + N skills, where N is determined by age and race.  As a 39 year old human, she gets D4 + 2= 3 +2 = 5 skills.  Humans roll for all of their skills randomly, non-humans have a mandatory first skill (Halflings - Cook) and a choice of second skill, if they have more than one (Elves  -Dance, Musicianship, Sing).

Now for a roll on the initial occupation: 34 = Herbalist  As a herbalist she gains the following skills:  Arcane Language - Druidic, Cure Disease, Heal Wounds, Herb Lore, Identify Plant, Read/Write (already has it), Secret Language - Classical, Secret Language - Guilder and a 20% chance of Prepare Poisons (57 = no).

She also has the Trappings of her trade.  A mortar and pestle and a string bag with dried herbs.

She can spend XP to buy 1 more Wound or a 10% increase in Initiative, Dexterity, or  Intelligence  or the skill Prepare Poisons.  As an adventurer, she gets a 'free advance' and chooses to increase her Intelligence.  Which is reflected in her Current Profile

Skills:
Ambidextrous - no penalty to using off-hand weapons.  +10% on all Dexterity based risk tests.
Arcane Language - Druidic: The tongue of the Old Druids and the most ancient men.  Found on many tomb inscriptions and artifacts.
Cure Disease - recognizes common illnesses automatically, rolls an Int test to recognize rare diseases.  Can cure a disease on a test against her Int plus the patient's Toughness.
Drive Cart - she can drive any animal drawn wheeled vehicle without needing a risk test.
Heal Wounds - she can bind Wounds in the field and restore up to 1d3 Wound points.  And afterwards if she makes an Int +20% test once per day for a patient, the patient will regain their Toughness in Wound points (otherwise they regain 1/2 Toughness.)
Herb Lore - recognizes the properties of different herbs and how to gather them
Identify Plant - a lesser version of Herb Lore, but also includes identifying plants that are not herbs.
Read/Write - She can read and write all the languages that she speaks
Secret Language - Classical: The Academic language akin to Latin or Greek.  Used in many academic and religious texts.
Secret Language - Guilder: The secret language used in Guild Rituals.  She would be considered a member of Guild of Physicians, although she could never rise in it as a mere provider of nostrums.
Silent Move Urban - she can move through built up areas almost silently.  Listen tests against her are a -10%.
Super Numerate - she has "an uncanny and deeply irritating ability to work out maths in almost no time at all." She gains +20% on Estimating tests and +10% on Gambling tests.
Trappings: A mortar and pestle and a string bag with dried herbs.
For twenty years, Elena and her husband crisscrossed the Empire, gathering herbs and selling them to the apothecaries and physicians in the cities, while providing healing to people of the countryside.  In the heavily patriarchal Empire, most assumed her husband was doing all the work and she just drove the cart and kept the camp.  In truth, she is a brilliant accomplished woman with a great depth of learning.  Her husband, their cart and home were destroyed in a recent beastman attack.  She has decided that she would like to settle down as a physician - but that requires that she gain enough money to live on for several years, pay the fees at the hospitals to study and the bribes need to get the physicians to overlook that she is in point of fact female.  While not a front line fighter, the adventuring party that recruits her has a much higher chance of coming back in one piece.