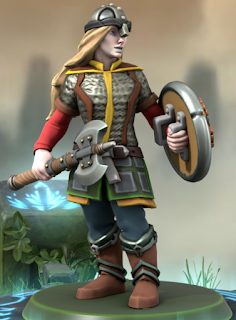 Nomads, Gaels and Picts.  Today I'm generating a Viking, more to point a Valkyrie.  The expansion uses the basic C&S character generation rules, but changes the Height/Weight distributions, making taller and heavier characters, which increases hit points - and adding +1 to their Constitution, which can add hit points. Nordic women also get a +1 Personal Appearance, as they were considered exceptionally comely in their era.  The big change is of course, they do not follow the Chivalric social pattern, rather they are almost all Warriors.