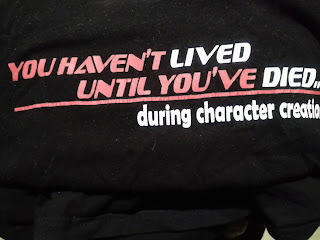 Played a LOT of Traveller in college, as I recall the much of campaign was done in concert with playing out 5th Frontier War.  But haven't played since.  I have used the generation tables to teach myself a number of programming languages.  I find that having a specific goal and good requirements makes it easier to learn.  And the Little Black Books generation systems are better than 90% of what I have gotten in professional career.

The system is of course, notorious for characters dying during the generation process.  I even got a T-shirt shown above and it's even similar to the classic Traveller pseudo-Optical Character Recognition font.

Still this guy survived without an issue.

1st Term:   Young Ilbak did poorly in school, knowing that his family connections would get him into the Longshoreman's Guild at the starport.  Shortly after starting there as laborer (+1 Endurance), he was working inside the cargo bay of the Free Trader Luisa Karnak when a group from the Sword Worlds' based Nightmare Snow pirates attempted to hijack the ship by rushing up the ramp.  When a nearby guard went down in the initial volley, Ilbak picked up his weapon and returned fire (Gun Combat skill), enabling the crew to raise the ramp and lift ship.  The ship's doctor having been caught dirtside, he grabbed a bulkhead mounted EMT unit and used it to stabilize the wounded (Medical skill).

The captain enlisted him in the Merchant Service on the spot and as the Karnak's 4th officer had been killed in the firefight, appointed him acting 4th Officer based on his quick responses in the emergency. (Commission)

2nd Term:  While eager and likeable, in the long run Ilbak's lack of education was destined to stall his career.  He was willing to help everywhere (Jack-of-all-Trades) but didn't have enough background to do the work on his own.  After his second hitch he left the service with 6000Cr in savings and was presented a shotgun to commemorate how he joined the ship.

He enlisted without a problem in the Merchant Service, having a +3 for meeting the bonus Intelligence and Strength scores.  He survived gaining +1 Endurance, Gun Combat and, surprisingly, a commission as 4th Officer, which gained him a skill point in Medical.

He successfully reenlisted and survived, but wasn't promoted.  He did pick up the coveted Jack of all Trades skill allowing him to perform any skill check without a penalty.

Mustering out he got a shotgun and then had the two lowest rolls on the cash table.  The rest is fluff.