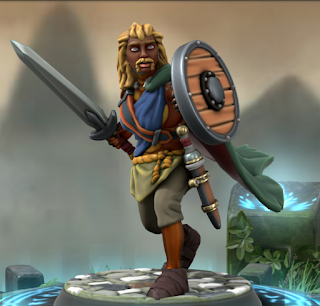 Doncan, son of Orry, is an exile from his tribe, now serving a rival cheiftain in the Dearthwood Forest east of the City State of the Invincible Overlord.  While his father is a member of his King's Guard, his mother was captured in a raid against a caravan of travelling Amazons.  From her, Doncan inherited not only an unusually dark skin tone for the Duneal tribes, but somewhat scaly skin and partially webbed toes and feet.  He's part merman and can hold his breath twice as long as a normal human as well as swim at the same speed he walks.

I'm stayed with Swords & Sorcerers today to generate a Celtic tribesman.  The only changes from the original C&S character generation system is determining Social Status - and that appears not to have been well edited, with one table ending at 61 out a hundred and not covering generating Royal characters, although there are tables for Royal characters.  This time I remembered to add the weapon and armor to the stat spreadsheet.  As is my wont I rolled his description on the tables I developed for the Wilderlands, where I decided that the Duneal Forester would be Irish-ish. 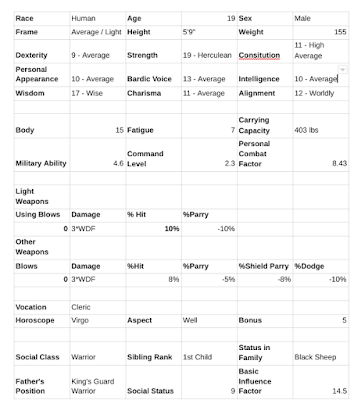 Armor Weapons and truncated to hit by AC chart 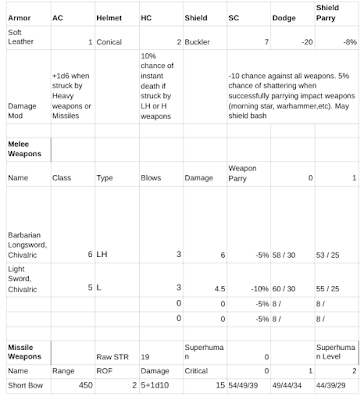 Another easy day in generation, remembered I'd built a look up table for weapons too, so a bit of cut and pasting made my life easy.