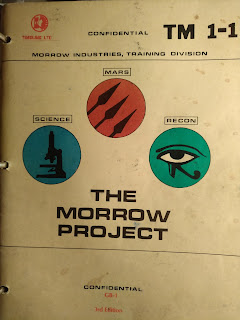 The Morrow Project is a post apocalyptic RPG where characters have been frozen, awaiting the wake up call to restore the world after World War III.  Sabotage has delayed the call for around 150 years, meaning that your mission of finding and gathering survivors to rebuild the United States has suffered a bit of 'mission creep'.  There are three types of teams Recon, Science and MARS (Mobile Assault, Rescue and Strike) who were intended to have complementary missions - now it's as scrambled as the DM or 'Project Director' wants to make it.

I didn't get the books until last year when it came to me from the estate of one of my best friends and fellow gamer of almost 40 years.

I may have played it once in college, but I feel like maybe it was a different game with a similar setting.  Anyone know of candidates?

Reading through the character generation rules, it uses an odd 4d6-4 system to generate scores between 0 and 20 on a bell curve.  The stats are mostly self-explanatory Strength Constitution, Dexterity, Accuracy (how good is your aim), Charisma, Psi (mental strength if you roll 15+ you may have psionic talents) and Luck.  Interestingly they have no Intelligence of Wisdom stat - but they solve that later:

As reading further through the rules, I found a separate handout containing ANOTHER character generation system based on Runequest, complete with percentile skills.  And it's complements of Chaosium and Tadashi Ehara himself!  RPG game design was a small world in 1980.  In this system they drop accuracy and replace it with intelligence.

I'm going to go ahead an use the original system.

The next item is to calculate "Structure and Blood Points", in other word Hit Points

Now it gets fun, calculating S&BP by hit location and they have more hit locations than Runequest.  I cheated and threw it into a spreadsheet and created an image of it.  I can't imagine doing this by hand, fortunately back in the day I had my trusty TI-30 hand calculator. 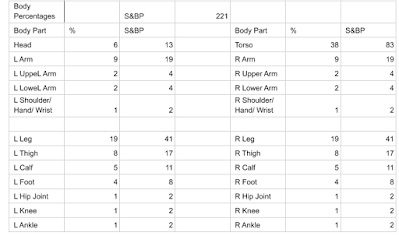 Look up Movement Points:  Dexterity 14 = 4 Movement Points.  Each action has a number of MP, from FIre Weapon (1 point) to Don or Remove Powered Armor (30 points)  Kind of like this system actually, but it does show it's roots in hex and counter board games.

Harrison is a member of a Recon Team charged with scouting for survivors and recommending aid from other more specialized teams.

He's the team expert in breaking and entering.

A bit more about the system, the first four pages are a list of US cities and military bases and the type and warhead of the Soviet missile that hit them.  Character creation is only three pages, followed by setting background fluff and 16 (out of a total 62) pages of illustrated weapons and equipment statistics.  10 pages of combat rules, descriptions and tables, then setting encounters and creatures.  Finishing with four pages of mutants, that I'd forgotten about.  Need to update my random table generator.  The crunch is strong in this game.

Tomorrow looks a bit iffy for posting, as I have work to do down at Traveller Adventures farm and will be stopping to play some AD&D on the way home.
Posted by Rod Thompson at 4:09 PM