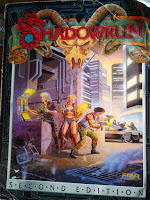 Set in the near future (2050s are getting closer all the time), this is a game set in a gritty cyberpunk world where America has collapsed magic and the old races returned in 2012.   Started playing this in the Navy, one of the few systems for which I bought more than the initial rule book.  Haven't played since the early 1990's, the creation system is an unusual point buy.

There are five categories (Race, Magic, Attributes, Skills and Resources) and five priorities (A-E) to start with.  You assign on a priority to each category and that determines what you have to work with - as shown in the table below.

So if you want to be a metahuman (Elf, Dwarf, Orc and Troll), you have to assign Priorty A to Race.  If you want to be an Elven Magic User you need to assign Priorty A to Race and Priority B to Magic.  That at best will leave you with Priority C to assign to the six physical and mental attributes (Body, Quickness, Strength, Charisma, Intelligence, Willpower)  - 20 points doesn't go very far even when the system caps human maximum at 6 points in all the attributes.   There are three other attributes that I'll address later as they are calculated values (Essence, Magic and Reaction).  Skills, well you get paid for having and using your skills for various, usually illegal, ends, so having a good skill set is important.  Resources are cash/magic points you still only assign one priority and get both.  The weird Y with two lines is the game currency 'nuyen' (new yen), but it's the real symbol for Yen.

There's no real character class definition, rather like Runequest, your abilities are defined by your skills.  They do provide a number of 'archtypes', NPC examples of characters.  A bunch of fighter types, detectives, gang members, mercenaries, company men.  Magic users - shamen, wage mages, street wizards and two technology focused characters - deckers (hackers) and riggers who specialize in controlling vehicles.

I'm going to create a 'rigger' a vehicle specialist.  As I will need a lot of cash to buy equipment and I don't care about race and magic here's my priority list.

As a rigger she needs quick Reactions. which are the average of Quickness and Intelligence so they are her highest scores.

Essence is the soundness of her central nervous system and spirit, which will be degraded by cybernetic implants.  She starts at 6 and it will be lowered when she buys her gear.

Not surprisingly for a Rigger, she spent a lot of points in Vehicle skills.  The description in parentheses (Pistol, Racing, Tactics) indicate a concentration within the skill.  Concentrations are rated one skill level higher and any other concentrations under the skill are rated one level lower.  For example for Firearms(Pistol) she is rated at Firearms 2, but for Rifles, Submachine guns, grenade launchers etc, she is Firearms 0.

Vehicle Control Rig Level 3 - 300,000￥ Cost - 5 Essence.  Neuro enhancers and muscular signal transference interfaces enabling her to use a vehicle as an extension of her body.  Adds +6 Reaction and +3d6 Initiative when she's rigging.

Datasoft Link - 1,000￥ Cost 0.1 Essence.  Allows the user access to the information on the data chips

_______________________________________________________________________________
Tashina looks normal, her only noticeable implants are a datajack and a chipjack such as an salaryman or woman might have for accessing their corporate matrix.  Inside she's barely human with most of her nervous system having been replaced by a high end vehicle control rig.
She's widely known as the hottest hover racer on the Sound, if not the West Coast.  She's invested her winnings in her own vehicle repair shop 'Tashina's  Tearers ' where she and her buddy/copilot/mechanic Gino create high end customizations of ground vehicles and aircraft.  And she has begun rotor racing in a brand new Wasp, one of the very few outside of corporation or military control.
She's obviously well connected with the racing industry.  What's not as well known are her corporate connections, who are rumored to have augmented their sponsorship money of her racing in exchange for both smuggling runs and extraction services for their more deniable retainers.
She lives very modestly in an apartment in repair shop.