The penultimate entry in this series takes me back to a version I only played in a single campaign.  I was pretty much out of gaming while the Navy moved me around from Virginia Beach to Newport RI to San Diego to New York City to Jacksonville and finally to Chicago where my career changed.  In December 1999 we moved back to Minnesota and I got back in touch with one of my gaming friends from college and Virginia Beach.  He invited me to join his 2nd Edition group and I've been back in gaming fairly steadily for the last twenty years.  As soon as 3rd Edition came out we picked it up and went on from there, so all I ever bought was a used Player's Handbook and maybe a source book.  I made a single character - a bard, who the party accused of being a thief.  (I did name his horse 'Back Pay')  In honor of that character, I've rolled up another one.

The problem with Bards mechanically (at least in 2e) is the highest Prime Requisite value they need is Charisma - but NONE of their abilities are really tied to it.  Influencing others is a Save vs Paralyzation with negatives based on the Bard's level.  Inspiring allies, just happens, range increases by level but nothing else.  So while I couldn't make Charisma a dump stat, there was no reason to max it out.

Intelligence is the second highest required Prime Requisite and the Bard is a Spellcaster.  But they have to find all of their spells after 2nd Level, getting the scraps the Wizard leaves for them.  While a Bard can cast Fireball (and would be cool to so) having a high intelligence doesn't really help them acquire it or cast it for more damage.  I will say that it helps them learn the spells, but I recently had a 1e Wizard with 18 intelligence roll a 98 to learn fireball - so he can't - and it shows nothing is guaranteed.

Dexterity in a lightly armored character is always a good thing, so max it out.

That left me with a 17 to place in Strength, Constitution or Wisdom.  Wisdom was ruled out immediately, no advantage there.  I almost went with a 17 Strength for the additional hit and damage.  But too many years on both sides of the screen have demonstrated how much of a game changer having more hit points is in the game.

Stats having been distributed, looking at Bard abilities had me looking back at the Thief tables for Pick Pocket, etc.  The racial bonuses pushed me to select half-elf as a race. I checked, in 2e humans don't get an extra proficiency, otherwise I would have gone with that.  That gives base percentages of Pickpocket 35%, Detect Noise 15%, Read Languages 0% Climb Walls 60%.  Distributed the twenty extra points 5 to Detect Noise and 15 to Read Languages.

Last thing to do was Non-Weapon Proficiencies.  A section, I had completely forgotten about.  As a Bard I felt obligated to burn one to learn a musical instrument, then reread the Bard entry and found I didn't need to.  So Appraise and Blind-fight (which takes two proficiency slots).

For a name, well, I was reading Mary Stewart's Crystal Cave series at the time and used something based on a minor character's name.  So I'll go with a Celtic name with a Latin ending again. 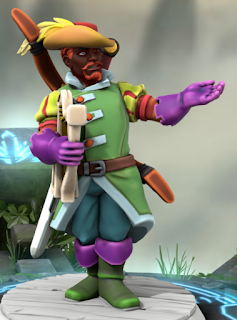